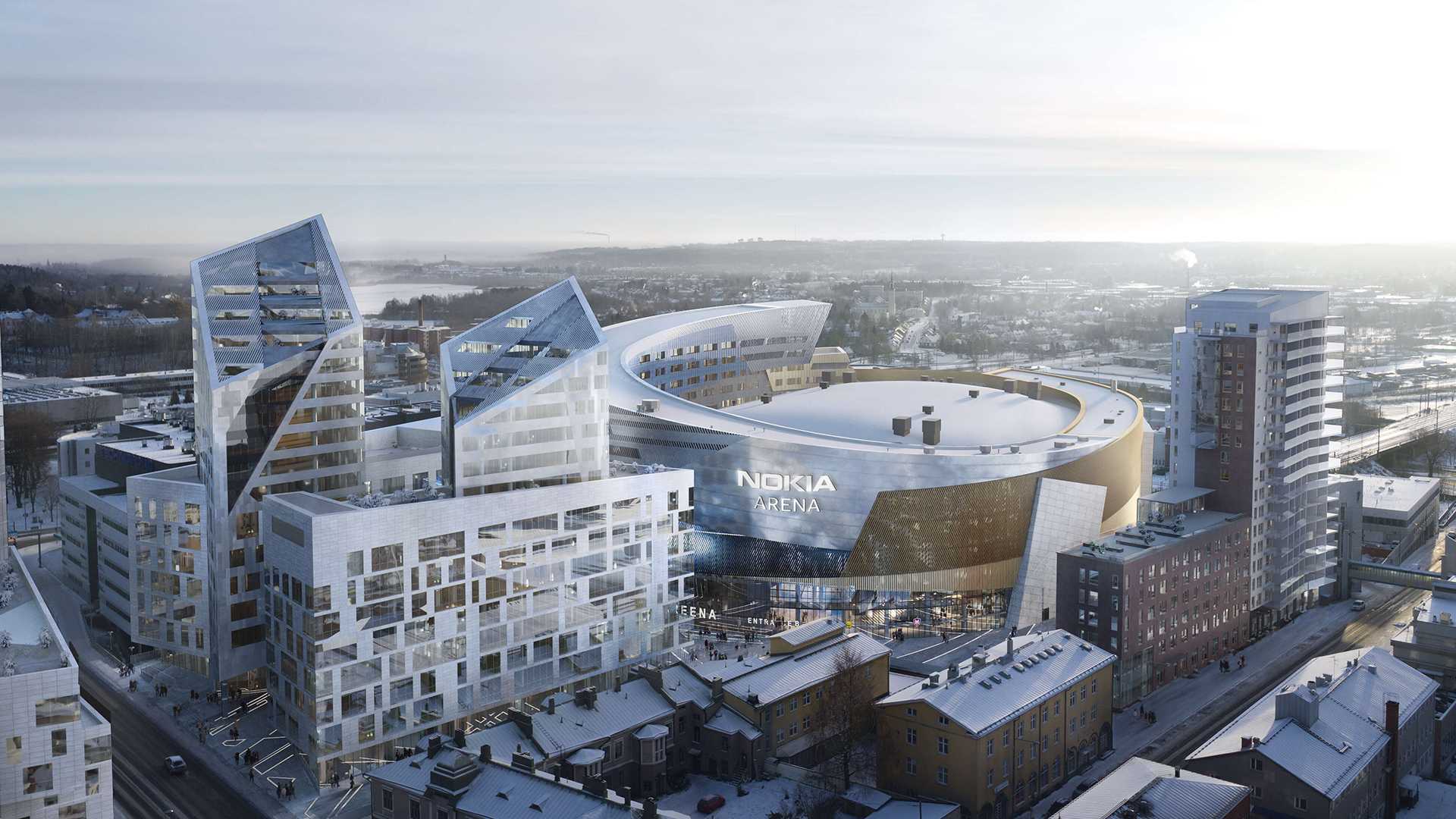 The foundation stone of the Tampere Deck Arena was laid in a ceremony at the heart of the sitein what was the first event held on the site. The event was attended by Mayor of Tampere, Lauri Lyly, SRV’s Chairman of the Board, Ilpo Kokkila, and Marko Hurme, who will start as the Arena’s Managing Director in November, together with all partners to the projects, invited by the Arena company, SRV and the city of Tampere.

“The laying of the foundation stone is the starting point for the next phase of the project. The deck itself has been under construction for almost two years, and we can now start building on top of it. Tampere’s new silhouette will soon begin to take shape as the arena and tower block structures rise in the heart of the city. The project has progressed according to plan, although the site is exceptional both in terms of its location and scale,” says SRV’s Project Director Henrik Eklund.

At the ceremony held today in the depths of the arena, a metal cylinder with the arena’s charter, today’s newspapers and valid Finnish coins was cast in the foundation stone as is the tradition. The event featured a number of leading artists, and the Finnish Ice Hockey World Championships Cup, won last spring, was also on display. Once completed, the Tampere Deck Arena will be the largest events arena in Finland and the first experience centre in Europe to be located in a city centre.

Business operations at the Arena to be launched this autumn

The new arena, which will rise onto Tampere Deck, is expected to significantly improve the appeal of the entire Pirkanmaa region, and the effects will be reflected throughout Finland. The estimated more than one million annual visitors to the Arena are predicted to generate up to 28 million euros of added value for Tampere every year. This corresponds to approximately 610 jobs.

“This is not just a project for Tampere and Pirkanmaa residents. The deck will house a first-rate arena, which, when completed, will be the most modern one in Finland, and an excellent addition to the events venues in the country. The arena combines urban development, a new area of city blocks and a multi-purpose arena to form an area never seen in Finland before. Even now, about 40 percent of the customers of experience activities in Tampere come from outside Pirkanmaa. Tampere Deck and the Arena will take us into a new era of experiences,” says Lauri Lyly, Mayor of Tampere.

A considerable number of the business premises and boxes have already been reserved, and it was confirmed in the spring that the arena will be the main venue for the 2022 Ice Hockey World Championships. The business management company in charge of the arena’s business will launch its operations later this year.

Leading Finnish companies will be in charge of sports and entertainment events and congresses at the Arena. Lapland Hotels will run the hotel operations, and NoHo Partners and Hartwall are among the companies that will manage the restaurants and catering services. The flagship of the entertainment activities will be Veikkaus’s casino. Tappara and Ilves will also play their home games at the Arena; these games will be an important part of the events calendar. Lippupiste will manage ticket sales for all events.